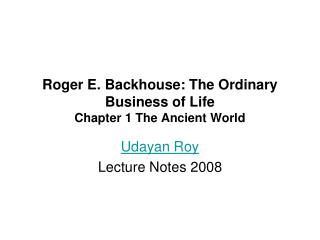 LEVERAGE Your Life And Business With Webinars - . key word, message and scripture. share. “every person ... every

Roger LeRoy Miller Economics Today - . chapter 22 the firm: cost and output determination. since 1989 there have been

Famine and Feast Life on the margins: the inequality of food and nutrition security AGRI-FOOD BUSINESS - . powerpoint

The Life and Leadership of Warren Gamaliel Bennis - . in 2007, businessweek called him “one of ten business school

Ch 5.3: Series Solutions Near an Ordinary Point, Part II - . a function p is analytic at x 0 if it has a taylor series

Jonathan Livingston Seagull a story - Themes self-perfection, self-sacrifice and individuality. this is a story about a

ORDINARY CADET TO ABLE CADET TASK BOOK - Ordinary cadet advancement. the 5 areas that you will be assessed in are:1.scc