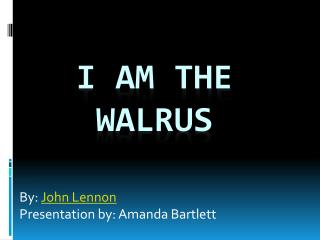 The Walrus! - . ian o ’connor. habitats of the walrus. areas they live

Walrus - . by rita mckain. they eat crabs, seals, octopus, sea cucumbers and snails, and fish. their predators are

The Pacific Walrus - . walruses are very large. they normally weigh from 2000 ponds to 4000 pounds. they can live up to

The Walrus and - . the carpenter. by lewis carroll. the sun was shining on the sea, shining with all his might: he did

Walrus adaptations - . have blubber to keep them warm. . have mustaches to find food. walrus tusks can be about one meter

Walrus Expo 2014 - . helena kauma. the idea. introduce what ky has to offer get to know ky people recruit more members to

I am weak, judgmental, I am the personification - Great mystery. teach me to be honest , that i may keep my promises to

I am the cyborg - . alex levy september 25, 2013. constant connection. from the internet, to smart-phones, to

I am the wallpaper - . by: raven roberts. slide 2. the first chapter takes place in her house and its her birthday but

I am the gatekeeper - . research using databases and google. what’s the information for?. what’s the purpose of the

I AM THE MESSENGER - . who is markus zusak?. markus zusak lives in sydney works a real job plays on a soccer team. he is