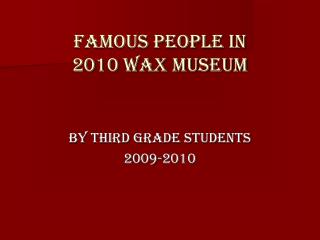 Famous People in 2010 Wax Museum. By Third Grade Students 2009-2010. Harriet Beecher Stowe was famous for writing Uncle Tom’s Cabin to help end slavery. By: Chelsea Allison . Sandra Day O’Connor was famous because she was the first lady in the Supreme Court. By: Tori Biggin.

Wax Museum In Mumbai - Welcome to famous wax museum in mumbai. best things to do in mumbai on weekends is to be with

Famous People - . i ’ m going to show you pictures of famous people. i want to find out if you know who they are.