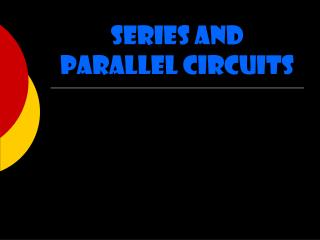 Series and Parallel Circuits. Circuits. Can either be series or parallel. Series. Current only takes one path for electrons Current flows through every part of the circuit. Lights in a Series. Series. If you add a resistor (like another light):

Parallel and Series Circuits - . introduction. the purpose of using electricity is to transfer electrical energy

Circuits - . series and parallel. ohm’s law. in a very isolated situation, we know that: v = ir but how does this apply

Series and Parallel Circuits - . lesson 6. the two simplest ways to connect conductors and load are series and parallel