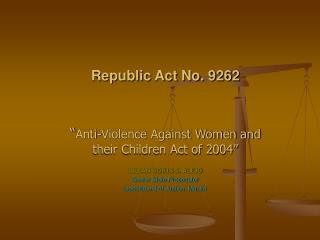 Republic Act No. 9262. “ Anti-Violence Against Women and their Children Act of 2004” LILIAN DORIS S. ALEJO Senior State Prosecutor Department of Justice, Manila. Women VS. 2. Their children legitimate Illegitimate Children under her care or custody -within or without the family abode.

Republic Act No. 8791 - . lawrence ong. republic act no. 8791. an act providing for the regulation of the organization

Republic Act. No. 8292 - . an act providing for the uniform composition and powers of the governing boards, the manner of

REPUBLIC ACT NO. 3571 - . an act to prohibit the cutting, destroying or injuring of planted and growing trees, flowering

BATAS KASAMBAHAY Republic Act No. 10361 - Republic of the philippines department of labor and employment bureau of

ANTI-RAPE LAW REPUBLIC ACT NO. 8353 - . an act expanding the definition of the crime of rape, reclassifying the same as a