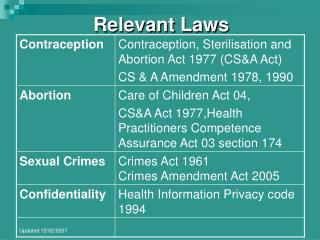 Relevant Laws. CONTRACEPTION. CS & A ACT Section 3 – Sale or disposal etc of contraceptives to children. This section, which restricted contraceptive advice and supplies to under 16 year olds, was repealed on 7 September 1990. The Legal and Ethical Environment of Business - . chapter 1 introduction to law. learning objectives. understand the

Legal Principles in Risk Communication - . legal and ethical understanding. staff handling a health crisis should have Domestic Laws Relevant To the ITPGRFA: - Draft executive order no. ___s. 201_: providing for the collection,

Delegated Legislation - . types of delegated legislation. starter – legislation true or false. consider each of the

The Process of Legal Research - . what is legal research?. part of problem-solving finding the law in order to solve a