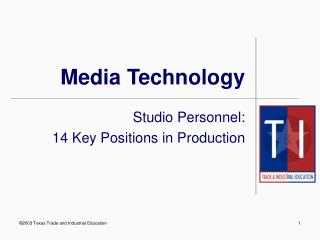 Media Technology. Studio Personnel: 14 Key Positions in Production. The Director. Creatively translates the written word or script into sounds and images Establishes a point of view to help determine the selection of shots, camera placements, movements , and staging of the action

Media Technology - . the power of television.

Media Technology I - . lecture notes and tutorials on: web : www.staff.city.ac.uk/~raj. aim of this module. describe the

TECHNOLOGY AND MEDIA - . edm152. media and the usage. object (model, chart, video, blackboard) that teachers use or what