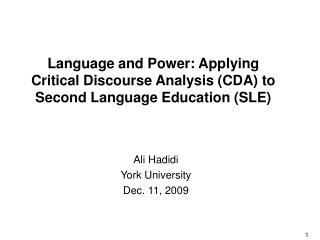 How to Do a Discourse Analysis - A. things to look for. what to notice when doing a discourse analysis. hidden relations

Does Language Policy Do What It Says on the Tin? - . some perspectives on language planning. power – discourse -

A Systematic Framework for Language Analysis - . what is language? one definition is that it is ‘a structured system

Dan’s Flirtations with Discourse ( and Narrative) ---in his approach to language acquisition - . “flirting with

Too many texts or not enough? Adapting the ‘discourse-historical’ approach - . philippa k. smith presentation to the

LANGUAGE AND EDUCATION - . ‘language is not everything in education but without language everything is nothing in