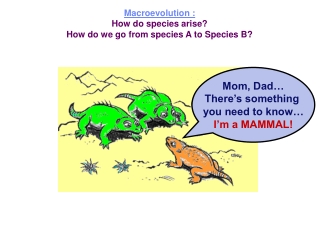 Macroevolution : How do species arise? How do we go from species A to Species B?. Mom, Dad… There’s something you need to know… I’m a MAMMAL!. Speciation. Tip! Use a simple flow chart to organize your information…. Barriers!. Geographic. Pre-zygotic. Post-zygotic. Allopatric

Lions - . king of the beasts. by: fd. introduction. do you like lions ? if you do, this power point tells every thing you

Lions - . j oseph sanfilippo. where does this animal live?. most lions live in africa. a small number of lions also live

1) Gene flow - . a) is movement of alleles from one population to another b) counts as true gene flow only if immigrant

Gene flow - Plant of the day drosera rotundifolia ... a miniscule, carnivorous sundew living in bogs in tofino , bc. .

Lions in action - . one day at my dad’s house, i was watching animal planet. it was about fierce lions. when they

lions - . authored by: b en connolly illustrated by: google images. how many types of lions are there in the world?.

Lions - The ruler of the animal kingdom. lions. one of the most fiercest animals on planet earth . africa. africa is the

Lions - By anson. lions. the lion’s

Lions - . by: lily and julia. they live in eastern and southern parts of africa. they eat antelopes, zebras, wild beasts

Lions - . by harley waller. there food was 1 zebras 2 wildbest and 3 was hogs. they hide in the desrt and woods they way