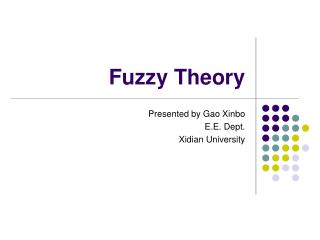 Fuzzy set theory - . abby yinger. definitions. set – any well defined collection of objects. an object in a set is

Introduction to Fuzzy Set Theory Weldon A. Lodwick - . objectives 1. to introduce fuzzy sets and how they are used 2. to

Fuzzy Logic - Logic is based on set theory, and when we switch to fuzzy sets it will have an effect on logic. fuzzy

FUZZY MCDM - . fuzzy number. definition is defined to be a fuzzy triangular number if its membership function. operations