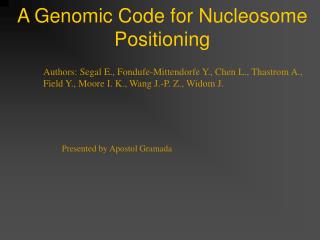 A Genomic Code for Nucleosome Positioning

A Genomic Code for Nucleosome Positioning

Genomic walking (1) - To start, you need: the dna sequence of a small region of the

The Genome is Organized in Chromatin - .  nucleosome breathing, opening, and gaping. a model for gaining access to core

NUCLEOSOMES - . chromosome structure. human dna’s total length is ~2 meters! this must be packaged into a nucleus that

Nucleosomes : what, why and where? - . rob brewster. outline. what is a nucleosome ? - how is dna packaged/organized in

Introduction to Genomic Sequencing Assembly Annotation Diego Martinez - . why do we want to know the sequence of an

Stash - We Code Together - Coding is simple and great if it's just you working on the code. it is getting much more