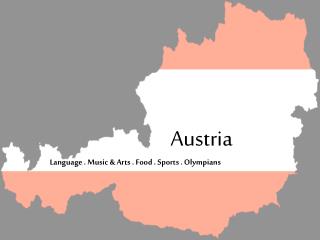 Let’s Learn About Austria - . wwp.european-union-eu.com. where is austria?. map of austria. www.exportinfo.org. a few

Austria - . by: miranda ganter and jaquesha collins. the name of my country. the name of our counrty is austria. this is

Austria - . austria is a country in central europe. it has ___________ with germany and the czech republic to the north,

The Rise Of Austria and Prussia - . by zuri marley . the thirty years’ war took a terrible toll on the people of the

PRUSSIA over Austria ? - 569-577 * create a graphic organizer describing and illustrating the rise of austria and

History of Austria - . empire of austria (1278-1918). for an almost incredibly long period austria was ruled by members