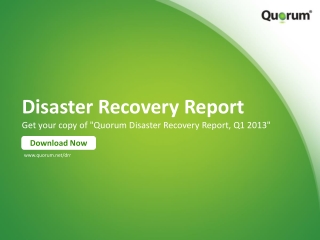 Download Quorum’s Disaster Recovery Report: www.Quorum.net/drr (shortened URL) Disaster of any kind can have a major impact on small to mid–sized business. As Quorum Inc.'s Disaster Recovery Report shows, disasters caused by hardware failures (at 55%), for example far outpace those caused by Mother Nature. Human Error (at 22%) is the second biggest contributor for disasters. Software failures and Natural Disasters are the other two major contributors. The resulting downtime from these disasters can bring small to mid-size business to the brink. Disaster Recovery technology that enables instant recovery of data, applications and systems- along with frequency and regular system testing- is the only way to safeguard a company's revenue, customers and reputation. In an effort to put into sharper focus the importance of disaster recovery technology as part of the an overall business continuity plan, this Disaster Recovery report presents of the frequency of various disasters. By using this report as a predictive tool, small to mid-size businesses will have a heightened awareness of the spontaneous nature of disasters. This report also highlights the Time and Cost of bouncing back from a disaster and how Small to Mid-Sized companies should safeguard their data. In conclusion, the report discusses that regular testing plays a key role in preparing for a disaster that can strike any time. Interestingly IT professions avoid regular testing due to complexities with the process and therefore it becomes imperative to deploy a Disaster Recovery system that enables automatic testing that will work as expected in an actual disaster.

Business Continuity and the Disaster Recovery Center - . the agency’s goal was to build a disaster recovery center with

Disaster Recovery: Using Colocation for a Sound and Economic - Disaster recovery planning continues to be a priority