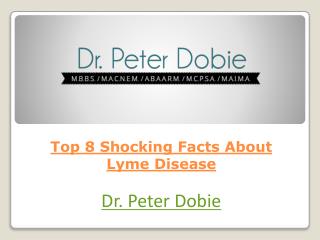 Lyme disease affects millions of people around the world. Still, we have little knowledge about this disease. Here are some scary facts about Lyme disease. Viral Disease - . slackers facts by mike ori. disclaimer. the information represents my understanding only so errors and

LYME DISEASE and Tick-born Co-Infections Dr. Emily Maiella 413.230.4462 - . introduction. what is lyme disease how is