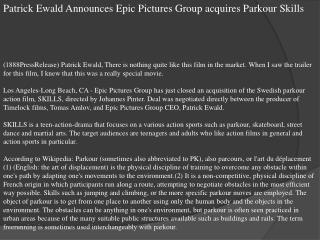 (1888PressRelease) Patrick Ewald, There is nothing quite like this film in the market. When I saw the trailer for this film, I knew that this was a really special movie. Parkour - . parkour - the art of movement and overcoming obstacles, usually in urban areas. ideologists of the movement

Hardcore Parkour !! - . german rock-climbing, and the people who like it. believe it or not…. germany is a huge

Parkour - . i chose to write about a free running sport called parkour because i think it is a truly challenging and

Parkour - . by ihsaan deer. where dose it come from and why do we need it?. parkour originates from france. the military

EPIC-BG Working Group - . - at the end of the last ug meeting, and in line with the conclusions from previous ug