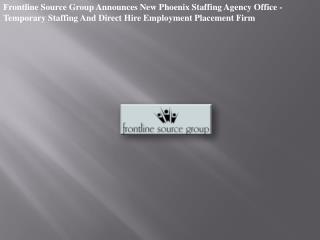 Retail Solutions Expo Email Marketing Bootcamp Phoenix 2012 - . by dr. michael stachiw. this presentation, along with a

Nurse staffing for safe patient care? - . why aren’t we there yet ?. the evidence. nursing workload and patient care:

STAFFING - . human resource management. the integration of all processes, programs, and systems in an organization that

Staffing Organizations - . staffing defined. the process of acquiring deploying and retaining a workforce of sufficient

The Flight of the Phoenix - . presented by: teresa winfield and candace reimer. bird of fire who lives alone in the