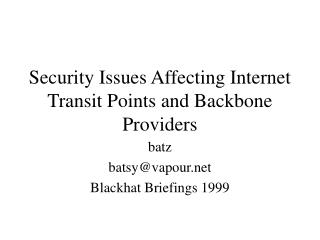 Internet backbone competition and broadband penetration - . mgt 825. a very brief history of the internet . 1957 us dod

Policy-Based Routing - . the bgp part of the lecture is based on a bgp tutorial by t. griffin from at&amp;t research.

Introduction to Middleware Technologies - . introduction. the integration of applications within and between business is

Weaponizing Space: Technologies and Policy Choices - Disclaimer: the views expressed herein are solely the views of the