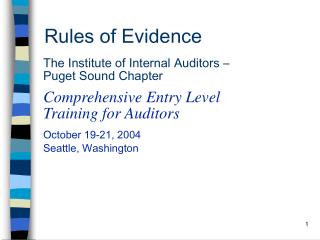 Rules of Evidence - . rule 1: leading questions. a question is “leading” if it suggests the answer the lawyer wants

RULES OF EVIDENCE - . a system of rules of when, how and whether some piece of information can be used in a trial.

Evidence Rules! - . weigh the evidence. discuss your findings with your fellow jurist (the person sitting next to you).

The Rules of Evidence - . i object ! overruled ! sustained !. most common grounds for objections. leading questions

Evidence Rules Outside of Trials - . thomas m. hruz. overview. what are the applicable rules? scope of the rules of

Laws of Logic and Rules of Evidence - . larry knop hamilton college. transitivity of order. for any real numbers a, b, c,

“The Rules of Evidence in a Court Trial” - . mr. kitchens february 10, 2005. general types of evidence. direct

Law of evidence lay rules for the production of evidence in the court of law - . evidence