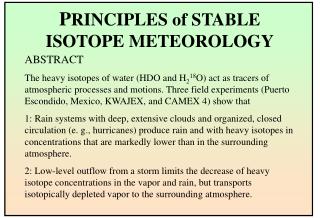 Stable Isotope Analysis - . the significance of stable isotopes. isotopes are atoms of an element that vary by mass,

High Temperature Stable Isotope Geochemistry - . lecture 38 . where does the water come from?. hydrothermal

The Seven P rinciples of Government - . a government in which people have the power to govern themselves. the government

E leven D esign P rinciples - . part 4. each visual should only provide the essential information needed for the audience