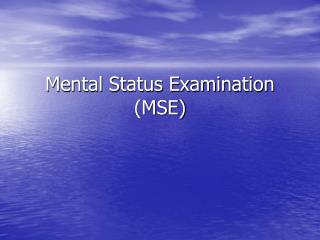 Mental Status Examination (MSE). What is it?. A template that assists a Clinical Psychologist in the collation and subsequent conceptual organization of clinical information about a client’s emotional and cognitive functioning

Mental Status Exam - . ahmad alhadi, md. what it is it?. the mental status exam (mse) equivalent to describes the mental