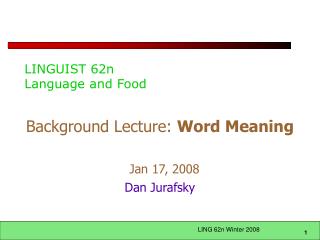 LANGUAGE CHANGE AND VARIATION IN ENGLISH (Chapter 1, pp. 21-62) - . main topics concepts of change and variation: how and

Food Spoilage - . what is food spoilage. spoilage is a natural phenomenon. it occurs at varying rates depending on the

FOOD PRESERVATION - . food preservation frees people from total dependence on geography and climate in providing for

FOOD SPOILAGE AND PRESERVATION - . facilitator : jasmina sangani. hygiene and food safety. food has to be protected at