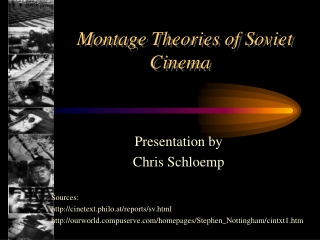 Soviet Cinema - . context revision. “you must remember that, of all the arts, for us the cinema is the most

Cinema of the Soviet Union - . a very, very exciting view of why the communists were better than everyone else. imperial

montage - . for revit families. basics. each height represents 1 family. each width represents 1 type. intention of the

Montage Reflection - . (before filling out this reflection – give your two montages a title. type your title below the