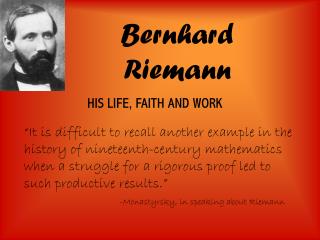 Bernhard Riemann. “It is difficult to recall another example in the history of nineteenth-century mathematics when a struggle for a rigorous proof led to such productive results.” -Monastyrsky, in speaking about Riemann. HIS LIFE, FAITH AND WORK.

Georg Friedrich Bernard Riemann - . “arguably the most influential mathematician of the middle of the nineteenth

The Fundamental Theorem of Calculus - . this power point presentation is created and written by dr. julia arnold using Mathematical Ideas that Shaped the World - . prime numbers. plan for this class . why are prime numbers interesting? what

Euler’s Method and Riemann Sums - . looking for insight in the special case of antiderivatives. turning corners (or

What is the Riemann Hypothesis for Zeta Functions of Irregular Graphs? - Audrey terras ucla, ipam february, 2008. what is

“On the Number of Primes Less Than a Given Magnitude” - . david sklar san francisco state university dsklar@sfsu.edu.

Riemann’s example of function f for which exists for all x , but is not - Differentiable when x is a rational number