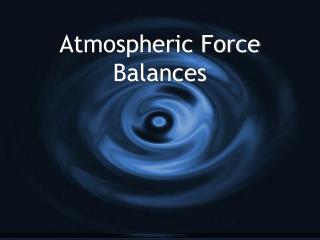 Atmospheric Force Balances. QUIZ !. Newton’s Laws of motion. 1. Every object in a state of uniform motion tends to remain in that state of motion unless an external force is applied to it. 2. F = ma 3. For every action there is an equal and opposite reaction. . Newton’s second law.

Atmospheric pressure and winds - . review of last lecture. thickness of the atmosphere: less than 2% of earth ’ s

Chapter 6 Atmospheric and Oceanic Circulations - . wind is a vector variable temperature is a scalar variable.

Geostrophic Balance - . the “geostrophic wind” is flow in a straight line in which the pressure gradient force

Atmospheric Stability Terminology I - . hydrostatic equilibrium balance, in the vertical, between pgf and gravity the

Chapter 5: Atmospheric Pressure and Wind - . the impact of pressure and wind on the landscape. atmospheric pressure