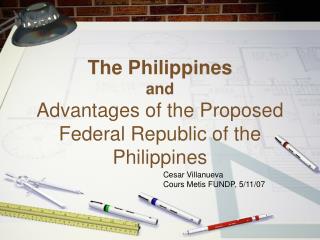 The Philippines and Advantages of the Proposed Federal Republic of the Philippines . Cesar Villanueva Cours Metis FUNDP, 5/11/07. Philippines. is an archipelago situated off the southeastern coast of the Asia Mainland 1,707 islands 91 million people (estimate for 2007)

Federalism - . federalism is the sharing of power between a national government and various state or regional

Funding the Republic Towards Sound PFM System : A Mission of the Bureau of the Treasury - . christine lacson-sanchez

Understanding Basic Government Rules - . familiarize yourself with several laws to improve your ability to work with the

Managing Employee Benefits - . benefits. benefit an indirect compensation given to an employee or group of employees as a

Biometrics at the Philippine Social Security System - . agenda. about sss biometrics in sss issues in sharing of