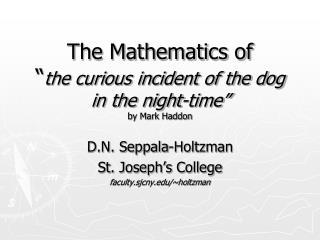 The Mathematics of “ the curious incident of the dog in the night-time” by Mark Haddon. D.N. Seppala-Holtzman St. Joseph’s College faculty.sjcny.edu/~holtzman. Christopher Boone . The protagonist of this novel is Christopher. He is a teenager living in Swindon, England.

Curious George WebQuest - . questions!. who are the authors of the curious george books? did the authors like animals?

the curious incident of the dog in the night-time - . dennis &amp; patten participation in government mepham high

SERIOUS INCIDENT REPORTS - . what is a serious incident. any event affecting a child or a program ’ s operation that is

The Curious Incident of the Dog in the Nighttime by Mark Haddon - . elements of fiction. characters. static character :

The Curious Incident of the Dog in the Night-time - . metaphors and similes literary terms booklet. #53. metaphor. # 53.

The new KS3 MATHEMATICS National Curriculum - . mathematics – aims that all pupils. become fluent in the fundamentals

Department of Mathematics and Statistics - . the college of new jersey. our department. 22 regular full-time faculty over

Christopher’s train trip from Swindon to London - . the curious incident of the dog in the night-time. british rail