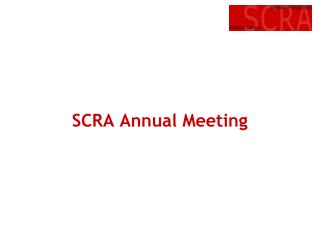 SCRA Annual Meeting. Agenda. Introduction of Board of Directors Election of new Board members Membership Proposed By Laws changes Aquatics and tennis Facilities Activities Financials. Current Board. Board of Directors *Steve Coutre, President

The Annual General Meeting - . session purpose: to discuss and present possible ideas and methods for the agm process in

Presentation to the Annual General Meeting of the CRNM - . may 16 th , 2014 by the manitoba registered nurses network.