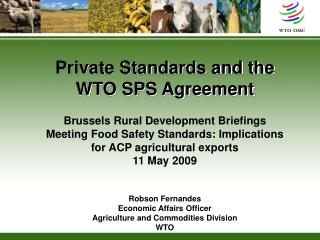 The SPS Agreement - . reaffirming countries’ right to protect health. why an sps agreement?. uruguay round agreement on

The SPS Agreement - . examples. why an sps agreement?. what is new? country b cannot apply uniformly the same measure to

WTO and the TRIPS Agreement - A business-oriented overview of intellectual property for law students wipo, geneva 20 –

Pesticide MRLs, the SPS Agreement and the Role of the Private Sector - . 1st november 2017, wto. gafta. grain and feed

Operation of the SPS Agreement - . lecture 38 economics of food markets alan matthews. key questions. what does the

THE WTO TRADE FACILITATION AGREEMENT - . the international organization that governs the rules of trade between

WTO Agreement on Agriculture: - . what’s it all about? what should be our advocacy?. what is the aoa?. part of gatt

WTO: Agreement on Agriculture - . lecture 2. tanzania:. some trends in exports: tanzania. contribution to growth in