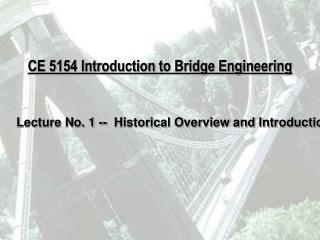 BRIDGE BUILDING - . overview. design. it is the essence of engineering!. topics of discussion:. what is a truss bridge?

The Sydney Harbor Bridge - . the origin and history. when the sydney harbor bridge was opened by the premier of new south

Department for ENGINEERING STRUCTURES - . professor vlado micov, ph.d head of department. bridge engineering what can we

Wheatstone Bridge An Overview - . orange team introduction to engineering design. introduction. history how does it work?

Bridge Software - A bridge connects networks and forwards frames from one network to another. ports a b e f bridge c d g