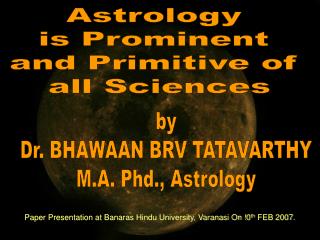 Astrology is Prominent and Primitive of all Sciences. by Dr. BHAWAAN BRV TATAVARTHY M.A. Phd., Astrology. Paper Presentation at Banaras Hindu University, Varanasi On !0 th FEB 2007. Existence of Earth based on Sun – Stars Its causes for seasons and rain

EVALUATION OF A PATIENT WITH PARAPLEGIA - . bydr ehtisham khyzermu i. learning outcomes. history and

Astrology Tips For Your Home Design - While you are going to design your home, then you need to take care about some by Dr. BHAWAAN BRV TATAVARTHY M.A. Phd., Astrology - Astrology is prominent and primitive of all sciences. by dr. bhawaan

Astrology: Is Your Destiny in the Stars? - . robert c. newman. astrology is very popular. any bookstore has many books on