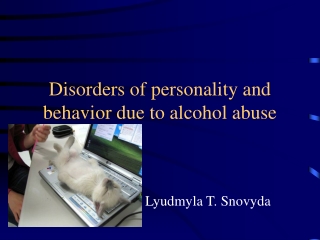 Disorders of personality and behavior due to alcohol abuse

Disorders of personality and behavior due to alcohol abuse

Drugs and Consciousness - . drugs and consciousness. psychoactive drugs: a chemical substance that alters perceptions and

Seizure Disorders and Epilepsy - . seizure is a paroxysmal, uncontrolled electrical discharge of neurons in the brain

Barbiturates - . by: laurie davis. important information. barbiturates are medicines that act on the central nervous

Alcohol, Tobacco, and Other Drugs - . sara kossove, lcsw psychotherapist 201-674-3800 skossove@hotmail.com. today we will

DRUGS and Addictive Behavior - . some things we want to learn. what is the definition of a drug? how are drugs