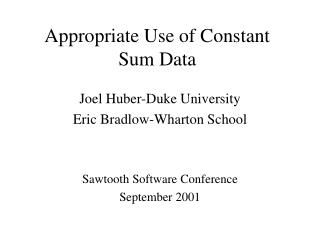 Appropriate Use of Constant Sum Data

Appropriate Use of Constant Sum Data

Constant of Proportionality! - . what is it?. a constant ratio in any proportional relationship really just another name

Data Analysis Methodology and Conventions - . ims consulting group training. january 31 2012. what this course is about.

Sample Exercise 10.1 Converting Units of Pressure - Solution. analyze: in each case we are given the pressure in one unit

Heteroskedasticity - . outline 1) what is it? 2) what are the consequences for our least squares estimator when we have

Do now – on a new piece of paper - . the diagrams below represent two types motions. one is constant motion, the other,