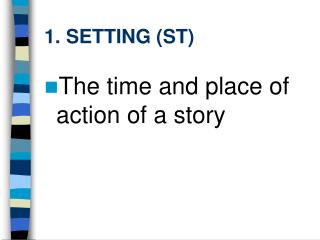 1. SETTING (ST). The time and place of action of a story. 2. CHARACTER SKETCH (NF). A shorter piece of literature that highlights a certain personality trait. 3. PROTAGONIST (CH). The central character or hero in a narrative or drama. The person whose conflict sets the plot in motion.

Setting - . october 8, 2012 come in and clear desks, sharpen pencils, read silently 1 st block only. warm up: look at the