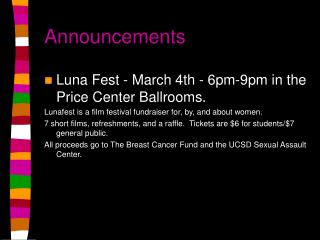 Announcements. Luna Fest - March 4th - 6pm-9pm in the Price Center Ballrooms. Lunafest is a film festival fundraiser for, by, and about women. 7 short films, refreshments, and a raffle. Tickets are $6 for students/$7 general public.

Announcements - . class / recitation slides available on the syllabus page check morning of for latest version we will