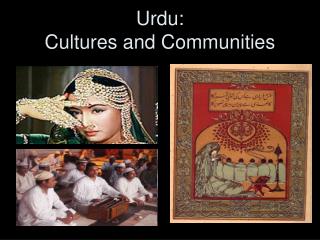 Urdu: Cultures and Communities. Historical Background. Urdu developed as a lingua franca in South Asia in the 16 th and 17 th centuries around the major Indo-Muslim cities of Delhi and Hyderabad. Hindi and Urdu have common conversational vocabulary and syntax.

Types of Cultures - . based on: - implications of cultures on organizations, management, and leadership, prof . eila

Introduction To Communities - . communities. it is rare in the environment that a species will exist in a population

Developmental Transitions in Individuals’ Roles in their Communities - . chapter 5. developmental stages and outcomes

Native Texas - . use your textbook to fill out the given tables. southeastern and gulf cultures pueblo cultures plains

Denison Leadership 360 Across Cultures - . is the denison leadership development survey (dlds) generalizable across