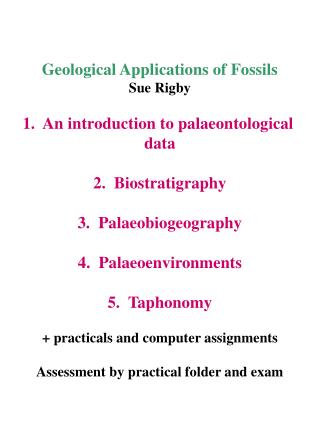 Fossils: An Introduction - . the theory of evolution by natural selection. evolution is a theory (set of related,

3. Fossils Day 2 - . eq: how do fossils provide a record of earth’s geologic history? learning target: i can identify

Biostratigraphy - . comparing rock and time units. larger units are built from smaller ones eg, stages are defined by

2.Fossils - . essential question: how do fossils provide a record of earth’s geologic history? learning target: i can

An Introduction to Linked Data, Its Applications and Challanges - . samad paydar samad.paydar@stu-mail.um.ac.ir wtlab

An introduction to PFLOTRAN and its application to CO 2 geological storage problems - Edinburgh, 10 january 2014 paolo

An Introduction to Differential Privacy and its Applications 1 - . ali bagherzandi ph.d candidate university of