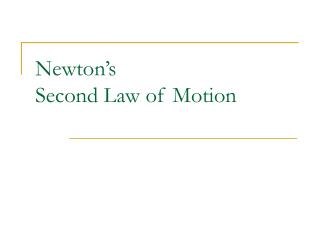 Force and Motion Before Newton - . galileo determined that objects fall at the same rate, regardless of their weight

Newton’s Laws of Motion - . now that we have learned how to describe motion, how do we cause the motion that we want?

Newton’s Laws of Motion - . notes. newton’s law of universal gravitation. all objects are attracted to one another.

Newton’s 1 st Law - . newton’s first law of motion. objects in motion will to stay in motion, objects at rest will

Chapter 5: NEWTON’S THIRD LAW OF MOTION - . this lecture will help you understand:. forces and interactions newton’s