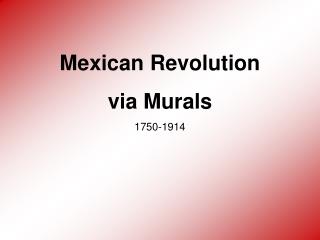 Age of Revolution 1750-1914 - . a time period in history that transformed the world politically and economically

THE INDUSTRIAL REVOLUTION 1750-1914 - . the domestic system to the factory system. agricultural revolution. predecessor

The Industrial Revolution 1750-1914 - . the industrial revolution. why was great britain so successful?. the

1750 - 1914 - . changes in the nature and functions of state structures. revolutionary ideas. revolution a popular

Murals of Mexican History - . overview. murals a mural is any form of painting on a wall or rock surface public art,

Mexican History Through Murals - . tenochtitlan marketplace by diego rivera. in the mural, aztec merchants trade their