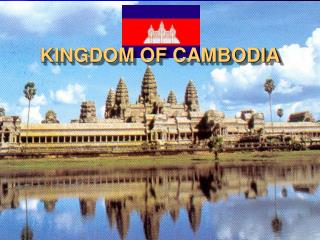 Kingdom of Cambodia National Committee for Disaster Management - . regional workshop on methodologies of assessment of

KINGDOM OF CAMBODIA Nation Religion King Ministry of Agriculture Forestry and Fisheries, - Department of agronomy and

CAMBODIA - . cambodian flag. the blue color symbolizes the country's royalty. the red represents the nation and the white

Cambodia - . statistics and history. rich history and played the role of a dominant regional power in the 12 th and 15 th

CAMBODIA - . the flag of cambodia. temple of angkor wat only flag in the world to incorporate a building in the design