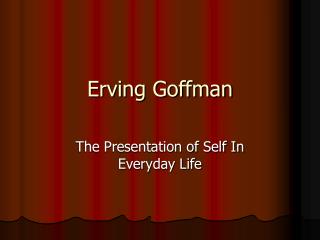 Erving Goffman. The Presentation of Self In Everyday Life. Erving Goffman. We are all actors within the Social World, a central theme from Goffman work. In a sense, we are call “Fakers” or engaged in a “Con Job” on ourselves to effect other people.

Goffman, “Frame Analysis of Gender” Three Arguments - . one can see social hierarchy and difference in social

The University of Massachusetts at Amherst - . what do the following people have in common?. bill cosby, entertainer

Notes on Goffman - . dr maurice mullard 22 october 2009. mental illness. what are the feeling of being defined as

The presentation of self in everyday life Erving Goffmann

“Can you pass the salt?” - . a level english language. why conversation works (when it shouldn’t…) according to

Goffman , “Deference and Demeanor” - . deference: definition and why we show deference (to the extent we do)

Face Negotiation Theory - . there is so much behind this theory. you are going to hate it. i’ll make it brief and to

Politness and Face theory - . there’s more to co-operation than following the maxims, we also need to be polite

Interactionism - . society is like: a human body (functionalism) a league table (marxism) a play ( interactionism ) a