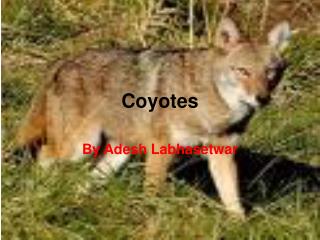 Coyotes - . leroy c. range. coyotes are found in all parts of the united states except for hawaii. they are also found in

Coyotes - . by l indsey and savannah. h abitat. l ive all over nc live in a den. what they eat. small animals berries,

Coyotes - . by matt fiorita. introduction. hello mate, the name of my animal is a coyotes scientific name is canis

Coyotes - . by: slayd c. what do they look like?. coyotes are about half the size of a wolf. they have reddish fur and a

Coyotes in the City - . researched and presented by. animal services education officer – linda dent. coyotes in

Watch Dog and the Coyotes QUIZ!! - . click here to start the quiz!!. by: bill wallace. question #1. what is the name of