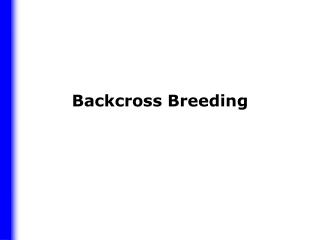 Breeding Larkeys 4/2/08 - . add entry to your table of contents glue in the data table, your entry should look like this.

PLANT BREEDING TERMINOLOGY AND SYMBOLS - . plant breeders are a group of professional separated by a common language. it

The impact of breeding on productivity of Atlantic Salmon and Rainbow Trout farming - . presentation prepared by:

Breeding Self Pollinated Crops - . cultivars. cultivar is a group of genetically similar plants, which may be identified

Plant Breeding Education - . how do we educate another generation of plant breeders?. public plant breeding . have

“Breeding without breeding” with only forests and combined seed orchards/breeding populations - . dag lindgren and