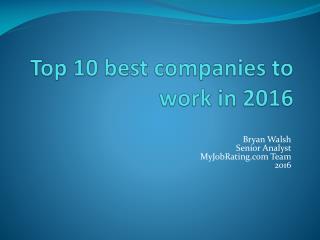 This analytical review MyJobRating team presented the site based on feedback and ratings left by employees. Top 10 Best Lubricant Companies in India - Lubricants and oils are the most vital piece of any nation. these common

â€‹Top 10 Tech Companies to Work For in 2018 - We are now living in a fully digital age, and technology plays a

Best Companies to Work For - What do your employees think of their jobs, the company, and their benefits? our workplace

Best in Top 10 software companies in jaipur, INDIA - Variable soft is fastest growing company in india and placed in top