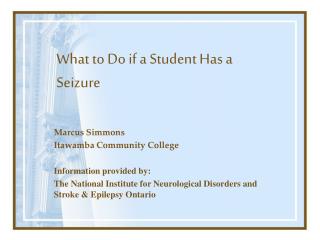 What to Do if a Student Has a Seizure

What to Do if a Student Has a Seizure. Marcus Simmons Itawamba Community College Information provided by: The National Institute for Neurological Disorders and Stroke & Epilepsy Ontario. Seizures Contents. Types and Description of Seizures Video content of Seizure Examples

What to Do if a Student Has a Seizure

Handling Broken Braces: What to Do If You Lose a Bracket - It is wise to get the problem solved as soon as possible by

What to do if…..? - . in pairs discuss each potential problem before giving some feedback to the class. you have been

Student Search and Seizure - . chris hamiel edad 620. the situation. suspicious object spotted. does the teacher have the

What do you do if… - . ?. you witness a friend stealing another friend’s ipod?. you get an invitation to go to lake

What to do to a Dob - . presentation by keith rickard 27 september 2012. cleaning the mirror. don’t!. cleaning the

Ways to Remember a Name and What to do if you Forget - . dotty harshberger. 1. be interested. pay attention as you are

What if a student meets more than one subgroup?

What do I do if I want to attend a PE extra curricular? - . meet the teacher at the sports hall changing rooms entrance.

What if a teacher refuses to “ Adapt ”?

What to do IF Medications Fail? - . dr linda huh pediatric neurologist bcch. outline and objectives. what is intractable

What to do when a student reports a sexual assault to you… - . linda anderson and carrie giese. how big is this

What do I do if I cannot understand a passage? - . reread (all good readers will have to reread 2,3 times before they