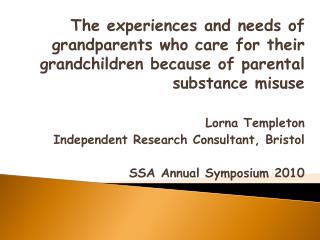 The experiences and needs of grandparents who care for their grandchildren because of parental substance misuse Lorna Templeton Independent Research Consultant, Bristol SSA Annual Symposium 2010. Background. Kids in the Car â€“ With Grandparents and Others Who Care - . a safety presentation designed to save lives, avoid

Mereotopologies: Fiat and Bona Fide Boundaries - . a substance has a complete physical boundary. the latter is a special

Drug Unit Review Game - . good luck on the test. using a legal drug for the proper reason but not in the correct amount