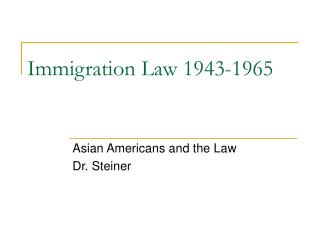 Immigration and the Red Scare - . the russian revolution – foreigners were communist!. world war one – foreigners

1840 Irish and German immigration to America - . ^this is a potato :). why the irish immigrated to america. a potato

1965 Immigration Act - . making (il)legal immigrants. question 1. how did the 1965 immigration act affect the

Beginning of Immigration - . immigration started in 1900s when people from other countries wanted freedom or other

AMERICAN IMMIGRATION - . or why is everyone coming here???. push-pull theory. reasons for leaving europe and asia things

Immigration Review - . what do you call people who move to the u.s. from another country?. immigrants. problems or hard