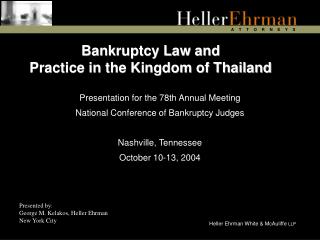 Bankruptcy Law and Practice in the Kingdom of Thailand

Bankruptcy Law and Practice in the Kingdom of Thailand

Law firm in Bangkok - Www.siam-attorney.com is a leading regional company in your law firm in bangkok. with lawyers and

Bankruptcy Overview - . why file for a bankruptcy? loss of job? medical bills? foreclosure? divorce? just a run of bad

Concept Based Learning International School of Ulaanbaatar: November 2012 - . what ’ s the big idea? do we ‘ get it

MALAYSIAN CONSTITUTION - . background: upon dissolution of malayan union, a new constitution was drafted and came into

Era 5 and 6 in East Asia The Qing Dynasty - . whgces era 5 craig benjamin. introduction: the qing dynasty. when the