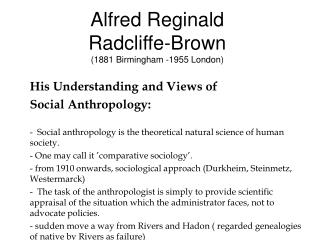 Alfred Reginald Radcliffe-Brown (1881 Birmingham -1955 London). His Understanding and Views of Social Anthropology: - Social anthropology is the theoretical natural science of human society. - One may call it ’comparative sociology’.

Bruce Stewart - . office of diversity and inclusion, opm. cultural hunt. rule 1. get out of our comfort zone…. rule 2.

Alfred Wegener &amp; Continental Drift - . dark brown = evidence of one connected. in 1915, the german geologist and

Anglo Saxons - . history. anglo-saxons angles and saxons invaded britain from germany, took over a large part of the

Chapter 31 - . transcription and regulation of gene expression to accompany biochemistry, 2/e by reginald garrett and

The Eagle by Alfred Lord Tennyson - . he clasps the crag with hooked hands; close to the sun in lonely lands, ringed with

The History and Identification of the Gifted - . the history of gifted and talented early 1900’s. 1925- lewis terman

Adlerian Theory - . birth to 6 years of age. adler holds that the individual begine to form an approach to life during