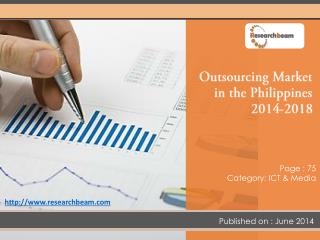 The Philippines was a US colony from 1898 to 1946, which gives the country a heritage of being an English-speaking country. The privatization in the country has led to a wave of investments. The Philippines government has undertaken various initiatives and enhanced the investment competitiveness and taxation conditions in country. There are number of preferential regimes that have been introduced by the government such as tax and custom benefits and the creation of a special economic zone, PEZA, which gives investment opportunities to foreign investors. In addition, efforts to simplify regulations and reduce administrative barriers offer fast development opportunities for foreign companies. The country's affinity with Western culture and developed telecommunications infrastructure makes it a favorable location for outsourcing.

Get Full Details at:
http://www.researchbeam.com/outsourcing-in-the-philippines-2014-2018-market Research on China Maternity Clothing Market, 2014-2018 - Reports and intelligence adds a report on research on china

Forecast of China Automotive Non-woven Market, 2014-2018 - Reports and intelligence adds a report on research and

Forecast of China's Tomato Products Industry, 2014-2018 - Reports and intelligence adds a report on research and

Latest report by Technavio, IT Market in India, Company Prof - It market in india 2014-2018: has been prepared based on

Global High-performance Computing Server Market 2014-2018 - , has been prepared based on an in-depth market analysis with

Genomics Market 2018 – Key Vendors Research and Analysis - Global genomics market 2014-2018, has been prepared based on

Global Label Market Scenario & Growth Prospects 2018 - Global label market 2014-2018, has been prepared based on an