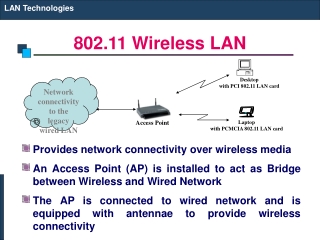 LAN Technologies. 802.11 Wireless LAN. Provides network connectivity over wireless media An Access Point (AP) is installed to act as Bridge between Wireless and Wired Network The AP is connected to wired network and is equipped with antennae to provide wireless connectivity. Desktop

IEEE 802.11 Wireless LAN - . why wireless lan?. traditional lans need wires, which may be difficult to set up in some

Wireless LAN and IEEE 802.11 - . by harit desai. introduction. lans were limited to the physical, hardwired